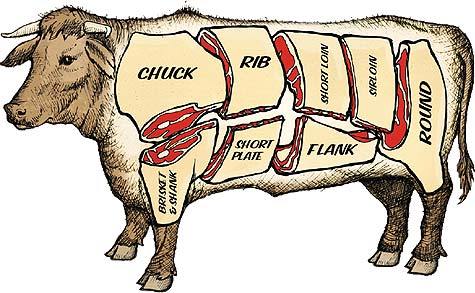 Sirloin steak is one of the most common cuts of beef and often the steak lover’s first choice. It has a fine but firm texture, a richness in flavour and it’s perfectly suited to grilling or barbecuing.

However, it’s also known by several different names, which often causes confusion when you are interpreting a recipe, ordering at a restaurant or at your local butcher or supermarket.

That’s why we’ve decided to try and clear it up, once and for all.

As you can see from the picture, the sirloin is situated in the hindquarter of the animal, and whatever the various steaks are called – whether it be Sirloin Steak, Porterhouse Steak, New York Strip or Striploin Steak – they’re all the same cut of beef and they’re all boneless.

The bone-in version of the Sirloin is also called the Shortloin, but is most commonly known as the T-Bone steak. It’s another all-time favourite because it has the Striploin steak on one side of the T-shaped bone and the Tenderloin or Eye Fillet on the other side of the bone. It’s the best of both worlds. You might also occasionally come across a cut referred to as the bottom sirloin, which is where the Rump steak comes from.

So, there you go! Sirloin steak – demystified.